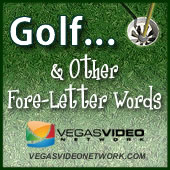 LAS VEGAS, April 18, 2011 — The VEGAS VIDEO NETWORK®, the first and only live online broadcasting network in Las Vegas, today announced that it is adding Golf & Other Fore-Letter Words to its network of live programming. The show will be hosted by golfing guru Dennis Silvers (ESPN, Fox Sports, Sirius/XM Radio) and be broadcast live every Wednesday at 6:00PM Pacific.

“Because Las Vegas is one of the premiere desert golfing destinations in the world, it was important to deliver programming focused on the sport,” said Scott Whitney, founder of the Vegas Video Network, “By combining Dennis Silvers’ energy and golfing expertise with the network’s broadcasting capabilities, we’ve got a show that golfing enthusiasts of all skill levels will enjoy.”

Golf & Other Fore-Letter Words will broadcast live and feature live chat questions from a world-wide audience. The show will also be available as video-on-demand on the VEGAS VIDEO NETWORK website (http://VegasVideoNetwork.com) and through a variety of syndication partners.

Each week, Dennis and a special guest co-host will be featured in three segments:

Viewers are encouraged to write in with their most pressing golfing questions to [email protected] or ask Dennis and his co-host live during the broadcast.

“I’m a big fan of what the VEGAS VIDEO NETWORK is doing,” said Dennis Silvers. “The idea of being able to interact live with our audience, and to get their questions answered by some of the most talented golfers in Las Vegas is outstanding.”

About the VEGAS VIDEO NETWORK
The VEGAS VIDEO NETWORK® is the first and only online LIVE broadcasting and media network that specializes in insider news and expert views about Las Vegas. All programming is broadcast live from our eight-camera, all HD studios, just steps from the Las Vegas Strip. The network is owned and operated by PodWorx, Inc., an Internet broadcasting company that specializes in podcasts, Web TV, and live streaming video productions.